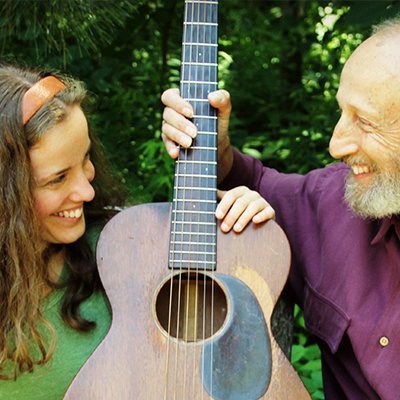 The father daughter duo of San & Emily Slomovits have been playing music together since Emily was a young child. San, along with his brother Laz, as the duo Gemini, have been a highly popular folk act throughout Michigan and the United States since 1973, and Emily began joining them on stage when she was just eight years old. Now 26, Emily is an accomplished violinist, having studied classical violin for more than a decade. She has also developed a lovely and unique singing style, which can be heard not only in concert, but also in theatre productions around southeast Michigan.

San and Emily’s concerts feature a wide range of traditional and contemporary folk, jazz and classical music. Their beautifully blended harmony vocals and exciting instrumental work breathe new life into a wide variety of American and international music, from folk to classical, klezmer to Broadway show tunes, traditional to contemporary. Audiences thrill to their warmth, humor and ease on stage. They released their first CD, “Innocent When You Dream” in 2013.