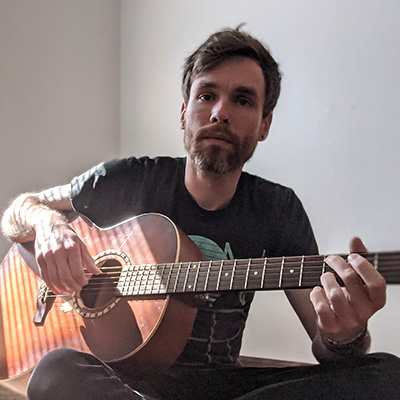 Chris DuPont is a Michigan-native tunesmith, endlessly reimagining the indie/folk paradigm. With an unmistakable ethereal tenor, diverse guitar work, and an ear for the cinematic, DuPont steers the classic eloquence and lyricism of 70’s folk/Americana into the iridescent haze of dream pop.

DuPont’s highly acclaimed album Outlier, hailed by music critics as a “life affirming devastator,” is a confession and an absolution in one. It’s no secret that DuPont’s thematic material tends to delve unflinchingly into vulnerable territories, but never without a sense of hope and return to worth. The unassuming vulnerability of his live performances has grown a dedicated following in the midwest and beyond, recently commemorated in his award-winning “Live in A2” LP. Chris’ new work “Floodplains” is slated for release in autumn of 2020.

Chris was a top ten finalist in the 2013 Rocky Mountain Folks Fest songwriter competition, and a first place winner at Eddie’s Attic songwriter night in April 2016. He has shared stages with a host of Midwest acts, as well as national acts Theo Katzman, Erin Zindle & The Ragbirds, Peter Mulvey, Edwin McCain, Brendan James, Needtobreathe, and Lucius.